In October 2015, whilst trawling the internet researching London OZ magazine and its art director Australian Martin Sharp (1942-2013), I came across the following photograph from June 1967: 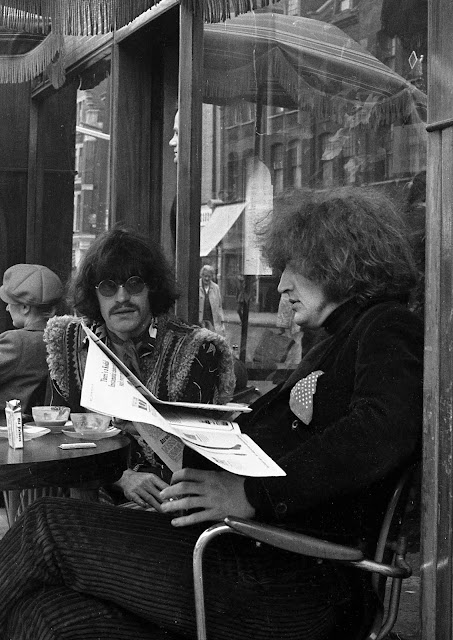 The photograph showed two unidentified men sitting outside a restaurant in the King's Road, London. The one on the left had a thickish head of hair, a mustache, circular, tinted glasses and wore a thick, embroided lamb's wool jacket. He was drinking coffee and held a cigarette in his right hand. The other had a thicker crop of scruffy hair, was dressed in a dark jacket with handkerchief in his pocket and wearing dark striped pants. He was reading a newspaper, had obviously finished drinking his coffee, and some cigarette papers were laying on the table in front of him, beside a pack of Old Holborn tobacco. Behind them a man was standing in a doorway, perhaps watching passers-by as he waited for his order at the cafe. I was able to identify the man seated at the table on the left as Australian artist Martin Sharp. The identity of the man next to him was not known, though a correspondent to this blog subsequently indicated that it was Bob Slough, a friend of the musician, writer and activist Mick Farren. 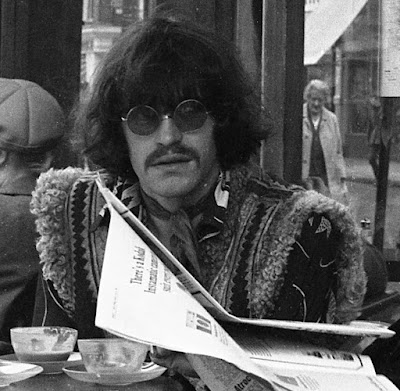 Martin Sharp at the Picasso Cafe, June 1967 (detail).
The cafe photograph was taken by , taken by the late John Hendy and posted to the internet by his son Simon. Hendy was an amateur who took his camera onto the King's Road during the Sixties and shot at random. He most likely did not know who Sharp was, though we may never know if they were acquainted as both have now passed away. Sharp obviously let the photographer click away, judging by the closeness of the shot at the table and the look on the artist's face, suggesting that he was engaged in conversation and intent on ignoring the intrusion by the camera. Initially the precise location of this photograph was not known, however a second shot by Hendy revealed that Sharp and Slough were dining at the famous Picasso Restaurant Coffee Bar. 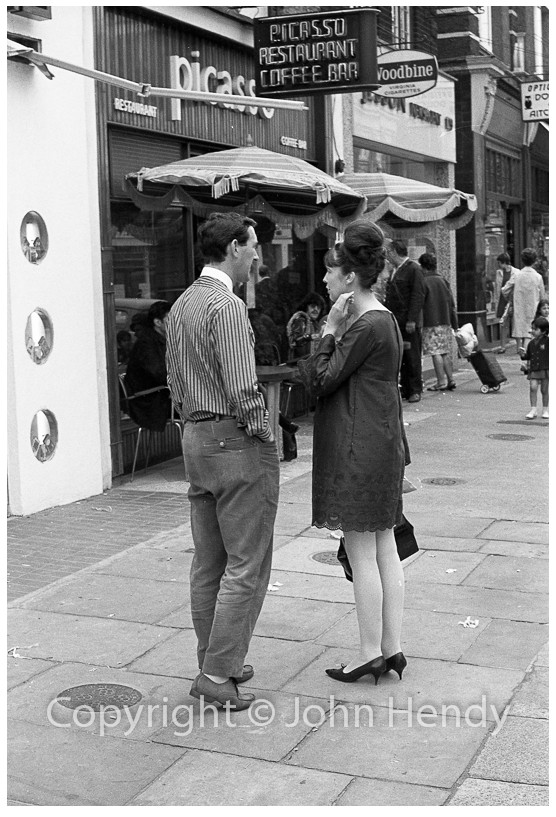 The Picasso opened in 1958 and was frequented by actors Michael Caine and Terence Stamp during the 1960s, along with musicians Eric Clapton and members of the Rolling Stones. David Hemmings was also a regular visitor whilst filming Michelangelo Antonioni's 1966 film Blow-Up. The Picasso survived until February 2014 when it closed, apparently boasting the same internal decor as it had upon opening. Initial reports of its closure from 2009 noted it was 'the last living restaurant link to the most famous thoroughfare of the Swinging Sixties' (Harden's 2009). In the second Hendy photograph above Martin Sharp can be seen looking over his shoulder towards the photographer, in between a couple talking in the foreground. Whether this was taken before, or after, the first photograph is unknown. One possible scenario is that Sharp noticed Hendy taking photographs in the street - snapping away much as David Hemmings (aka David Bailey) did in the film Blow Up - and called him over. At that point Hendy took the close-up photograph of Sharp and Farren. 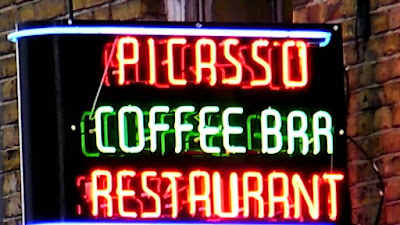 These two photographs are of interest for a number of reasons, apart from the fact of the rarity of such everyday street shots and the quality of Hendy's work. First of all, they show Martin Sharp in June 1967, during one of the most significant and productive periods of his career as an artist. At the time he was heavily involved with OZ magazine as graphic designer and art director. The famous issue number 4 was released that month, bearing an exquisite gold and pink fold-out poster cover by Michael English and Nigel Waymouth - also known as Hapshash and the Coloured Coat - and filled with Sharp's drawings and motifs, including a classic Norman Normal black and white cartoonish strip and a set of 22 tarot cards. Sharp was also assisting Peter Ledeboer in setting up the Big O Posters company and working on posters such as the iconic Bob Dylan Blowing in the Mind and Legalise Cannabis, the latter for a rally to be held in Hyde Park on 16 July. The song he had written with friend and house mate Eric Clapton for the band Cream - Tales of Brave Ulysses - had been released in May as the b-side to Strange Brew following the band's recording session in the United States. Generally Sharp was leading a frenetic bohemian / libertarian lifestyle, as noted by Clapton in a video interview recorded for the 2013 Australian documentary The Sharp Edge.

June 1967 was also the height of the so-called Summer of Love, and the peak of the Swinging Sixties in both the United State and Great Britain. It was marked by the 4 June release of the Beatles groundbreaking LP Sgt. Pepper's Lonely Heart's Club Band and the fiery performance by the Jimi Hendrix Experience of the title track at the Saville Theatre three days later.

The young Australian was there to witness it all, with an 'in' to the in crowd due his independent wealth, artistic talent, association with OZ, warm, open personality, good looks and sheer Aussie cockiness. Sharp and his friend Richard Neville reveled in the opportunities presented them by London during 1967, after having left Sydney in February of 1966 and traveled overland to London via the Asian hippie trail. In the metropolis they encountered the sex, the drugs, the music, the art, the underground and the new, alternative lifestyles of the burgeoning counterculture.

They found a general feeling in London that this was a time of change, when young people could create a future very different from the past. The conservatism of the immediate post war years was being replaced by a colourful, often psychedelic, opportunism, where freedom was the cry, the old was uncool, and fun was to be had. OZ magazine was there to both report upon, and promote, these changes and the various cultural revolutions taking place around the world. The quaint 1958 British Nuclear Disarmament Party logo had been universally adopted as the new peace sign, spurred on by the horrors of the Vietnam War and the general barbarity of totalitarian and democratic governments around the world. On 19 June the Beatles All you need is love was being presented to over 400 million people via the world's first television satellite broadcast, and Dylan's The times they are a-changin' was being sung, to all of which artists such as Martin Sharp were reacting.

During 1967 Sharp was resident at The Pheasantry on King's Road, adjacent to the fashion boutique I Was Lord Kitchener's Valet. The Picasso cafe was across the King's Road and a couple of streets down, according to the map on the Swinging London web`site. The Pheasantry was, for a time, home to a collection of noted Australian expatriates - Sharp, writers Germaine Greer and Clive James, photographer Robert Whitaker and film maker Philippe Mora. A third photograph of Sharp from the same period as Hendy's is known. It is a somewhat closer shot of the artist, with cigarette in mouth and wearing the same lamb's wool jacket over a dark, turtle neck sweater. 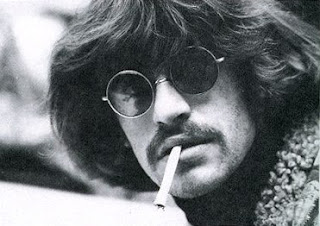 
A self-portrait from 1968 reflects a similar image to that seen in the photographs, though with the addition of psychedelic colours. In it we see the thick crop of hair, the circular glasses, the mustache extended towards the chin, and the intense stare. 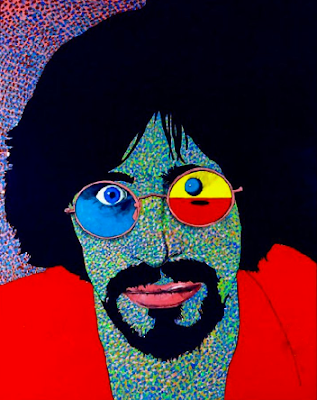 The fact that Martin Sharp should be anonymously captured in time at one of the most significant moments in his long and illustrious career as an artist is uncanny, inexplicable and fortuitous, thanks to the initiative of the free spirited photographer John Hendy.


King's Road cafe to Clapton and the Stones is shut due to recession, Evening Standard, 7 July 2009.